U.S. stocks were mixed Tuesday morning after back-to-back days of gains as investors evaluated another round of quarterly financial results from companies.

The S&P 500 (^GSPC) and Dow Jones Industrial Average (^DJI) each barreled down roughly 0.5% at the open, while the technology-heavy Nasdaq Composite (^IXIC) was off by 0.4%.

Among specific names in focus early Tuesday, General Electric’s (GE) stock fell 2% after reporting a fourth-quarter profit that was weighed down by its renewable energy business, even as the industrials company delivered an upbeat profit forecast, citing strong demand for its jet engines and power equipment.

Johnson & Johnson (JNJ) shares rose 1.4% after the healthcare giant reported full-year guidance above expectations despite the company’s chief executive officer warning earlier this year that the macroeconomic outlook is uncertain.

Shares of 3M Company (MMM) tumbled 5.5% after the manufacturing conglomerate reported a lower profit over an inflation-related drop in demand for items including air purifiers and respirators, while announcing it would cut 2,500 jobs.

Microsoft Corporation (MSFT) is scheduled to report its results after the closing bell.

Traders work on the floor of the New York Stock Exchange during opening bell in New York City on January 18, 2023. (Photo by ANGELA WEISS/AFP via Getty Images)

In other pockets of the market, the U.S. dollar steadied after falling to the lowest in nine months across recent days, while in commodities, oil futures inched higher. West Texas Intermediate (WTI) oil — the U.S. benchmark — traded near $82 per barrel. 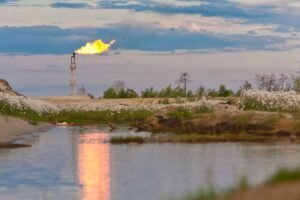